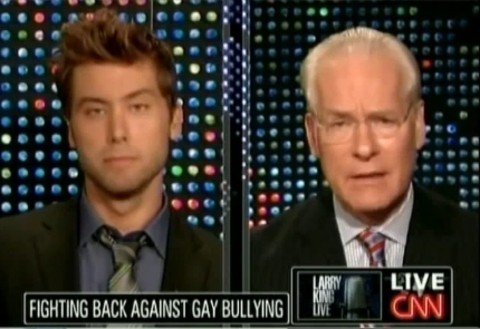 Bass admitted that he used laugh along while his friends taunted gay classmates. "When you're 13, 14, you just go along with what the other people are doing. You just want to fit in. You want to make sure that your friends like you," the singer confessed. "You're going to crack jokes, you're going to laugh along with it. And when you're a teenager, you're not really thinking, oh, I'm being a bully by laughing along with it… But you know, you're also a bully by condoning the behavior and making the jokes along with them."

Meanwhile, Berkus verbalized the isolation of living in the closet, unsure of what "gay" even means: "You are trying to hide a fundamental part of yourself, what happens is that you cannot focus on anything else. Please understand, too, there was no Youtube. There were no — there was no Internet, nothing like that, when I was growing up."

Wanda Sykes also made an appearance, and tied the rise of anti-gay bullying to homophobic legislation, like Don't Ask, Don't Tell. "I believe that it is assisting," she said. "I'm not going to say that that's… the crux of it, because this has been going on for decades. But I think maybe what's making people a little more vocal… is because of issues that — like Don't Ask, Don't Tell and Prop 8. They're so much in the forefront right now of politics that maybe that's, you know, causing people to do more harm."

At the end of it all, gay favorite Kathy Griffin reminded viewers that they're not alone, and that our collective efforts can put an end to bullying: "If you're watching this at home and you feel enraged but helpless, you can help. All right, come see me at the Gibson Theater. Make a monetary donation. Come get a pamphlet. Sign up for the Trevor Project. Sign up for Give a Damn. Go talk to somebody."

I've included the entire episode AFTER THE JUMP…