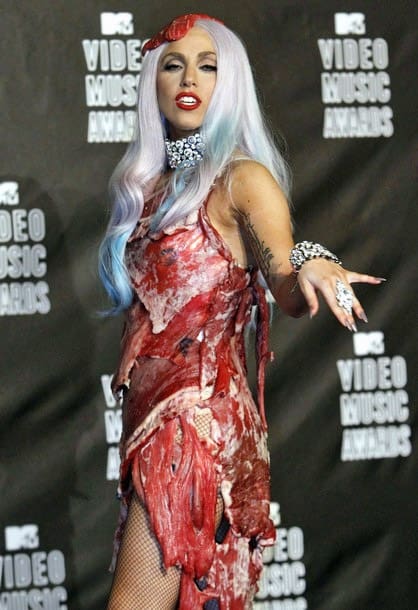 At least Elton John thinks so. Her new album, Born This Way, won't be released until next year but being Elton John allows you to listen to a very early preview. According to Entertainment Weekly, John had this to say about the album and its title track:

“I love her, and I love her ability to write,” he says. “I love the songs she writes.” A collab between the pair—who’ve become bosom buddies since performing together at January’s Grammy Awards—is a good possiblity. “I’d love to in the future,” John says of working with her. “I’d love to do that.” Then he elaborates: “There’s a chance I might do one track with her [for Born This Way], but it’s just, she’s so busy, and I’m so busy, we can never get together!” But, he adds, “I’ve already heard [Gaga's new album], so I think it’s more or less done. [Born This Way is expected to be released early next year.] Her record—it’s f—ing amazing. ‘Born This Way,’ which is the title song, will completely get rid of Gloria Gaynor’s ‘I Will Survive.’ This is the new ‘I Will Survive.’ That was the gay anthem. This is the new gay anthem."

If you missed this year's VMAs, Gaga sang a few bars while accepting an award on stage. Listen to the audio snippet, AFTER THE JUMP.