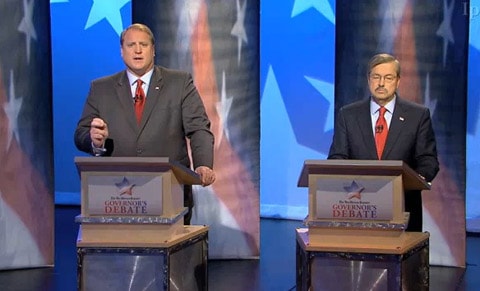 As a follow-up to my earlier post on the situation in Iowa, here's a clip from last night's Iowa gubernatorial debate between current Governor Chet Culver and former Governor Terry Branstad, in which the candidates field two separate questions about marriage equality.

Jeremy Hooper at Good as You, on Governor Chet Culver's answer: "Yes! Finally. An apt articulation of law, the role of the independent judiciary in determining the constitutionality of said law, and the reason why the conversation between a unanimous high court decision vs. a public vote on minority rights is not an equally merited tête-à-tête."

Previous Post: « Watch: British Nuclear Sub Aground Off Scotland
Next Post: Ricky Martin’s New Single Artwork: ‘The Best Thing About Me Is You’ »