43-year-old William Lynch was arrested by police in Santa Clara, California on Friday for the May 10, 2010 attack on Jesuit Priest Jerold Lindner.

The AP reports on the attack and the decades-long anger that apparently led up to it: 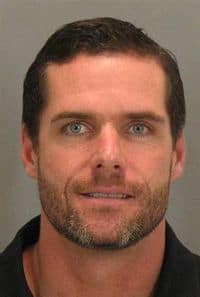 During a confrontation at the Jesuits’ Sacred Heart retirement home in Los Gatos, Calif., Mr. Lynch repeatedly punched Father Lindner in the face and body after the priest said he did not recognize him, said Sgt. Rick Sung, a spokesman for the Santa Clara County Sheriff’s Department. Mr. Lynch and his younger brother settled with the Jesuits of the California Province, a Roman Catholic religious order, for $625,000 in 1998 after accusing Father Lindner of abusing them in 1975 during weekend camping trips in the Santa Cruz Mountains.

Mr. Harris said the boys, who were 7 and 5 at the time, were raped and forced to have oral sex with each other while Father Lindner watched. Father Lindner, 65, has been accused of abuse by nearly a dozen people, including his sister and nieces and nephews.

Investigators connected Mr. Lynch to the attack using phone records, Sergeant Sung said. A half-hour before the episode, a caller identifying himself as Eric called the home and said someone would arrive shortly to inform Father Lindner of a family member’s death. Father Lindner was able to drive himself to the hospital after the attack. He did not return a call left on his answering machine. He has previously denied abusing the Lynch boys and has not been criminally charged. The abuse falls outside the statute of limitations.

The attack was foreshadowed in an interview Lynch conducted with the LA Times in 2002 in which he told the newspaper: “Many times I thought of driving down to L.A. and confronting Father Jerry. I wanted to exorcise all of the rage and anger and bitterness he put into me. You can’t put into words what this guy did to me. He stole my innocence and destroyed my life.”

Previous Post: « Thousands Show Up At Rally In DC To Help ‘Restore Sanity’
Next Post: Jon Hamm and Jason Sudeikis Lock Lips On A Hog »