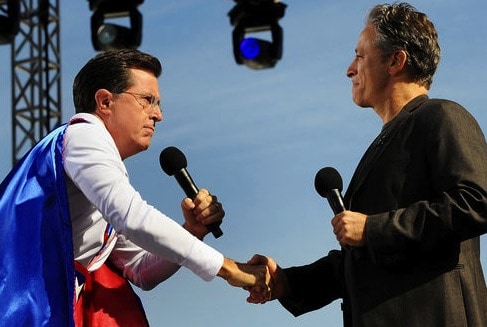 Earlier today, exactly two months after Glenn Beck and Sarah Palin held their "Restore Honor" rally on the Mall in Washington DC, Jon Stewart and Stephen Colbert held a counter rally of sorts calling for a resotoration of sanity.

The New York Times reports on the event:

It was a Democratic rally without a Democratic politician, featuring instead two political satirists, Mr. Stewart and Mr. Colbert, who used the stage to rib national journalists and fear-mongering politicians, and to fake-fight each other over dueling songs about trains.

Though at no point during the show did either man plug a political candidate, a strong current of political engagement coursed through the enormous crowd, which stretched from the Capitol almost to the Washington Monument, an overwhelming response to a call by Mr. Stewart on his show on the Comedy Central network. The turnout clogged traffic, and filled subways and buses to the point of overflow.

The New York Times's Brian Stelter CTV puts the crowd estimate at 250,000. The Huffington Post helped bus 10,000 of those people from NYC to DC. Colbert himself tweeted his own crowd estimate: 6 billion.

What exactly was this rally about? At the end of the event, Stewart asked the massive crowd that exact same question. His response: 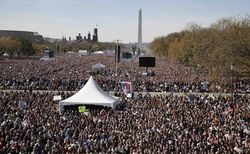 This was not a rally to ridicule people of faith or people of activism or to look down our noses at the heartland or passionate argument or to suggest that times are not difficult and that we have nothing to fear. They are and we do. But we live now in hard times — not end times. And we can have animus and not be enemies.

But unfortunately, one of our main tools in delineating the two broke.

The country’s 24-hour political pundit perpetual panic conflictinator did not cause our problems, but its existence makes solving them that much harder. The press can hold its magnifying up to our problems, bringing them into focus, illuminating issues heretofore unseen — or they can use that magnifying glass to light ants on fire and then perhaps host a week of shows on the sudden, unexpected dangerous flaming ant epidemic.

If we amplify everything we hear nothing.