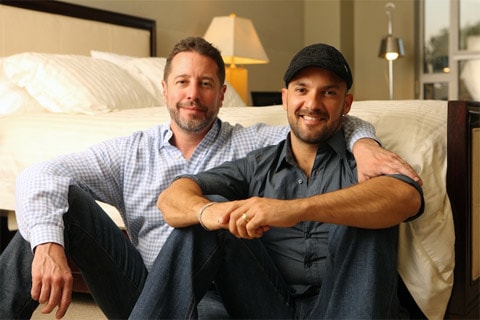 I'm sure you remember this couple, Greg and Aurelio, who tried unsuccessfully to have their wedding announcement published in the Union-Leader, the second-largest newspaper in New Hampshire. The two will marry in that state, where same-sex marriage became legal at the beginning of the year. The paper's publisher, Joseph W. McQuaid, has released a statement defending the decision to not print the wedding notice. McQuaid also claims that, though the Union-Leader, believes that marriage is between a man and a woman, that does not make the paper anti-gay.

"This newspaper has never published wedding or engagement announcements from homosexual couples. It would be hypocritical of us to do so, given our belief that marriage is and needs to remain a social and civil structure between men and women, and our opposition to the recent state law legalizing gay marriage.

That law was not subject to public referendum and the governor (John Lynch) who signed it was elected after telling voters that he was opposed to gay marriage. Indeed, in no state where the public has been allowed a direct vote on the subject has gay marriage prevailed.

We are not "anti-gay." We are for marriage remaining the important man-woman institution it has always been.
While the law sanctions gay marriage, it neither demands that churches perform them or that our First Amendment right to choose what we print be suspended. In accordance with that right, we continue our longstanding policy of printing letters to the editor from New Hampshire citizens, whether or not they agree with us."