White House senior adviser Valerie Jarrett will make an appearance at a party put together by the Human Rights Campaign tonight and this has sparked Servicemembers United to issue a terse statement asking her to meet with LGBT war vets beforehand. 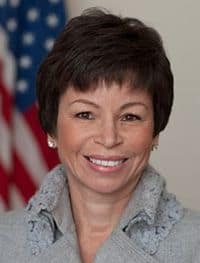 “We certainly do not feel like the White House is a ‘strong supporter’ of gay and lesbian troops and veterans right now,” said Alexander Nicholson, Executive Director of Servicemembers United and a former U.S. Army human intelligence collector who was also discharged under “Don’t Ask, Don’t Tell.” “Before she appears at a black-tie fundraiser to tout the administration’s ‘strong support,’ Jarrett should meet and talk with those who have actually been impacted by this discriminatory law and who continue to fight this uphill battle for the lives and livelihoods of gay and lesbian troops. To ignore the reality of the administration’s choices, a reality manifested in our daily lives, while appearing at a party hosted by an organization that has given cover to this administration would be incredibly insulting.”

Nicholson expands on his call in a blog item in today's Huffington Post: "As for Valerie Jarrett, the audience she owes a real speech to is not the one she will stand in front of tonight. It is those who sweat and toil around the clock to make sure that she continues to enjoy the freedom to snub them with another hollow appeasement attempt, as well as the committed veterans who are actually working and sacrificing day in and day out to ensure that the interests of their active duty brethren are looked out for. That audience, it is certain, will not be in attendance tonight."

Kevin Naff of the Washington Blade reacts: "Don’t hold your breath, Alex. The Democrats are big on words, not so much on action. And why not? They know the gays will line up to support them no matter what they do, so inaction makes perfect sense."