Looks like The National Organization for Marriage is still trying to associate the King name with their cause. 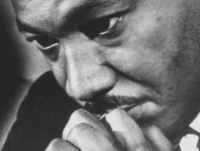 NOM, which earlier this month released ad attacking New Hampshire Governor John Lynch for signing gay marriage into law, has now partnered with The Minnesota Family Council to release an ad that encourages voters to support Minnesota Republican gubernatorial candidate Tom Emmer because he does not support marriage equality. The ad uses images and soundbites of Martin Luther King, Jr. with a voice-over that is a vacuous and blatant scare tactic.

"Gay marriage has consequences. Legal experts predict same-sex marriage will result in a flood of lawsuits against individuals, small businesses and religious groups who don’t accept it. When Massachusetts imposed gay marriage, second graders were taught that boys could marry other boys. In the District of Columbia, Catholic Charities was forced to end its eight-decade old adoption and foster care programs."

Watch the very predictable radio spot which has been turned into a Web video, AFTER THE JUMP.