One of the Chilean miners responds to the rumors that their so-called "pact of silence" has to do with gay sex: "No, nothing like that ever went on. We were too busy trying to survive to think of sex."

Archie Comics's first gay character, Kevin Kellar, has been such a massive success that he will get his own four part mini-series in the summer of 2011.

Germany Chancellor Angela Merkel says that her country's multi-cultural appraoch is a failure: "We feel tied to Christian values. Those who don't accept them don't have a place here."

Antoine Dodson is squeezing out as much as he can out of his 15 minutes.

Former Governor Jesse Ventura bashes former Governor Sarah Palin: "Anybody that would put Sarah Palin to the top of their list will never get me. She's a quitter…She quit in the middle of her term. That's the contract you have with the voters."

Bill Clinton's back out on the campaign trail. 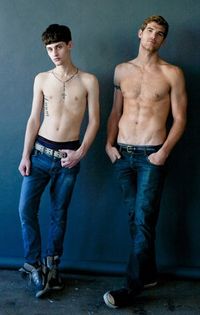 I'm happy to report that models are becoming less boyish and more Jon Hamm-ish. Even Jim Nelson, the editor of GQ, tells the New York Times that “The twink thing seems over.”

The Tyrannosaurus rex was even more savage than first thought; they wouldn't even think twice about eating their own kind. Said one researcher: "If something is dead, it's lunch."

The Scream 4 trailer is coming.

That was quick. The lesbian couple asked to leave a mall in North Carolina for kissing get an apology from the owners: "We welcomed the opportunity to sit down with the women and offer our sincere regrets over last week's incident."

Jake Gyllenhaal looks great for someone who is about to hit the big 3-0.

Maureen Dowd on what she calls "the era of Republican Mean Girls": "Grown-up versions of those teenage tormentors who would steal your boyfriend, spray-paint your locker and, just for good measure, spread rumors that you were pregnant."