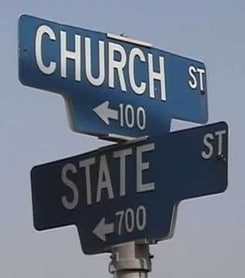 Iowa next month will vote on whether to retain or oust three of the State's Supreme Court Justices who approved gay marriage. Pastor Cary K. Gordon knows where he stands: against, and he used his church to distribute 1,000 mailers letters urging voters to sack the Justices. Gordon's position's more than just "one man, one woman," however; he's waging a full scale attack on the IRS.

The IRS prohibits religious organizations that receive tax-exempt status to participate in the political realm, a law that puts the Mormon Church, with its work against gay marriage, in a sticky situation. While that Church wants to avoid controversy, Gordon prays for it, reportedly uttering the same appeal over and over, "Dear God, please allow the IRS to attack my church, so I can take them all the way to the U.S. Supreme Court."

Though advocates of church and state separation are naturally wary of Gordon's position, the pastor takes a less legal perspective and alleges that the IRS actually approves of his involvement: "[The law's] wrong. It needs to be challenged, and I don't think the IRS will do anything about it, because I think they know it's wrong."

Gordon goes on to say that the IRS would "rather let me blather about this and leave me alone than risk losing their intimidation power over thousands of other churches."

The IRS insists it does indeed look into church/state complaints, and have investigated 44 cases from the 2006 election cycle. Twenty-six incidents involved "improper political activity," so they clearly aren't afraid to take church's to task.

Gordon's taunts and challenges are part of a broader religious movement, like the Alliance Defense Fund's "Pulpit Free Sunday," aimed at thrusting the church further into the political process via a "free speech" argument.

So, now the IRS has a decision: make Gordon's prayers come true, or allow him to disregard the law, perhaps sway an election and make the G-Men look like fools in the process. Of course, if the government goes after Gordon, they're almost guaranteeing he becomes a best-selling figurehead for the right wing cause, so maybe they should just leave him alone…

Previous Post: « Eminem Discusses Homophobic Lyrics With Anderson Cooper
Next Post: Happy National Coming Out Day, To One And All »