Relevant discussion at the 3:30 mark. 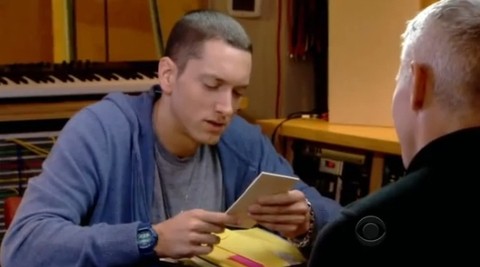 Musician Eminem sat down with Anderson Cooper on 60 Minutes last night. And, since Cooper has become a champion against homophobia, the anchor asked Eminem to why he uses the word “faggot” so freely.

Eminem explains that he’s always heard the word, and that it’s not necessarily tied to homosexuality, “That word was thrown around so much, you know? Faggot was, like, it was thrown around constantly, to each other, like in battling, you know what I mean?” he asked, before insisting that he doesn’t hate gay people. “I don’t have any problem with nobody, you know what I mean. Like, I’m just whatever.” Asked whether he needs to take responsibility for his words, Eminem puts the onus on parents to censor their children’s lives.

As for criticism that’s he a homophobe, brought up most often by the gay group GLAAD? Eminem plays the victim: “I felt like I was being attacked,” he said. “I was being singled out. And I felt like, is it because of the color of my skin? Is it because that, you’re paying more attention? Is it because there’s certain rappers that do and say the same things that I’m saying. And I don’t hear no one saying anything about that. I didn’t just invent saying offensive things.”

Watch Eminem discuss the “f-word,” AFTER THE JUMP.