A woman claims that she was propositioned by Christina Aguilera at a popular gay bar in LA. According to the woman, Aguilera, who just filed for divorce from her husband earlier this week, was told that the singer was in an open marriage. 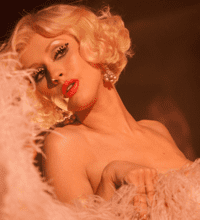 “I was at The Abbey one night when Christina’s bodyguard approached me,” a woman who wishes to remain anonymous told RadarOnline.com.

“He said, ‘My boss would really like you’ and pointed over to Christina.” The source said Christina waved to her, but that she was confused because her husband Jordan was at the bar with her. “The bodyguard told me it was an understanding within their marriage and that she brings girls home and Jordan’s okay with it,” the woman said. “I met Christina in the bathroom and she told me she liked to play with girls. “I ended up not pursuing anything with it because the situation just seemed so weird to me, but Christina was definitely looking to hook up.”

According to the source, Christina has been known to frequently approach women while out at gay bars in Los Angeles. “It’s funny because I had a couple girlfriends tell me that they were approached by Christina too,” the source said. “My understanding was that Jordan wasn’t involved when she brought girls home."

Back in May, Aguilera told Out Magazine that, while she finds women attractive, there's one thing she can't live without: "My husband knows that I get into girls. I think it's fun to be open and play. The line is real to me. My husband and I check in with each other, but I definitely love women. I think they're more attractive to the naked eye. I don't think I could ever really be with a woman…And you know, I love dick. To be honest, that I cannot live without."