In an interview with the AP Monday, Illinois Governor Pat Quinn expressed hope that the legislature would pass civil unions in the state: 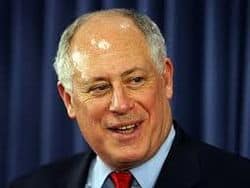 "One piece of legislation Quinn hopes lawmakers will tackle during the upcoming session is Democratic state Rep. Greg Harris' bill allowing civil unions. Quinn called it a 'good' bill and said Harris was close to having enough support to pass it. 'To have a strong economy you embrace diversity,' Quinn said. Brady had vowed during the campaign to veto civil unions legislation if he was elected governor. Quinn said it sends a message to companies when Illinois has laws that respect the diversity of the state. Harris of Chicago, who was still counting votes to see if enough support was there, said Quinn's win will help and lawmakers who may still be on the fence can also look to the victory of Republican U.S. Senator-elect Mark Kirk, who also supports civil unions. 'People sense there is really movement for this. This is not gay marriage,' Harris said."