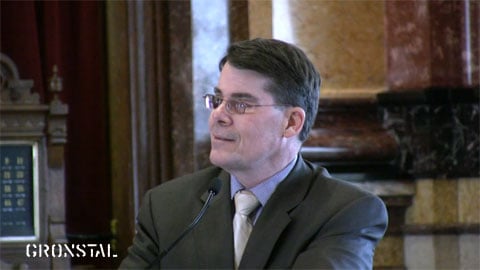 The Des Moines Register reports that Iowa senate Democrat Mike Gronstal has vowed to block any vote on an amendment to the state's constitution that would ban same-sex marriage:

Republicans will occupy the governor's office and will control the Iowa House next year, and there's a chance that final results could give Republicans a 25-25 deadlock in the Iowa Senate.

But Senate Democrats will maintain at least equal power — which will give Majority Leader Mike Gronstal authority to prevent a vote on a marriage amendment to the state constitution.

"There's no mechanism whereby senators, even a majority of senators, can override the majority leader," according to Secretary of the Senate Mike Marshall, a staffer who ensures rules are followed.

Senate Republicans intend to try various maneuvers to force a vote, even though they don't believe such efforts will succeed. Senate Minority Leader Paul McKinley, R-Chariton, hopes public pressure might eventually compel Gronstal to allow a vote, but Gronstal said Wednesday that will never happen.

Gronstal believes the right thing means protecting the civil rights of gays and lesbians. He reaffirmed Wednesday that he won't bow to pressure, no matter how nasty it gets.

"The easy political thing for me to do years ago would have been to say, 'Oh, let's let this thing go. It's just too political and too messy,' " Gronstal said. "What's ugly is giving up what you believe in, that everybody has the same rights. Giving up on that? That's ugly."

In April, Gronstal gave a beautiful speech on the topic. Watch it, AFTER THE JUMP…

Previous Post: « Colorado School Objects to Student’s ‘Marriage is So Gay’ T-Shirt
Next Post: Watch: All This Sarah Palin Ad is Missing is ‘2012’ »