This unexpected news comes today via excerpts form a new book to be published by Pope Benedict. 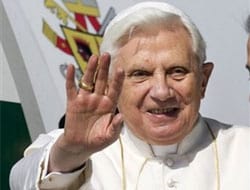 He said condoms could reduce the risk of infection with HIV, such as for a prostitute, in a series of interviews he gave to a German journalist.

The comments appear to soften the Roman Catholic Church's hardline stance, which until now had banned the use of any form of contraception.

When asked whether the Catholic Church is "fundamentally against the use of condoms", the Pope is said to have replied, in the book entitled Light of the World: The Pope, the Church and the Signs of the Times:

"It of course does not see it as a real and moral solution.

"In certain cases, where the intention is to reduce the risk of infection, it can nevertheless be a first step on the way to another, more humane sexuality," he said.

In which "certain cases" does he refer to? The Pope uses male protitution as an example of when people should use condoms.

This new belief goes very much against what the Pope said just last year about condoms being used to in the battle against AIDS. At the time he said, "You can't resolve it with the distribution of condoms. On the contrary, it increases the problem."