Roy Ashburn's life has changed considerably since his arrest in Sacramento earlier this year.

Equality California has just ranked him a very respectable score on their legislative list – 86. That's much higher than his ranking last year, when it was zero. The California State Senator claims that it was his coming out that changed how he does his job these days. 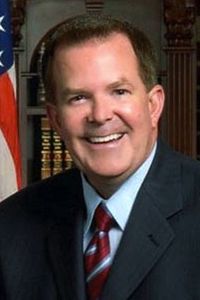 Sen. Roy Ashburn, who came out earlier this year after rumors surfaced that he was at a gay night club the night he was arrested for drunken driving, scored 86 percent in
Equality California's 2010 legislative scorecard — higher than some Democrats on the list.

The Bakersfield Republican was given a grade of zero percent from the group in 2009 , when he voted against or abstained on every single bill included in the ranking.

This year, he supported 12 out of 14 of the measures that factored into the Senate scores.

Ashburn defended his earlier record after publicly disclosing his sexual orientation earlier this year — saying his votes were aligned with the views of his district constituents — but soon changed his course by speaking out and voting for a handful of LGBT-supportive bills.

"I would not have been speaking on a measure dealing with sexual orientation ever, prior to the events that have transpired in my life over the last three months," Ashburn said on the floor this year, during a vote for a bill he ultimately did not support. "I am no longer willing or able to remain silent on issues that affect sexual orientation, the rights of individuals and so I'm doing something that is quite different and foreign to me."

Click here to see how other politicians fared on Equality California's scorecard.

What else is Ashburn up to these days? Like most people these days he's working on a book which, according to the Bakersfield Californian, will be out "soon."