The archbishop of Washington, Cardinal Donald Wuerl, made an appearnace on "Fox News Sunday" to discuss "don't ask, don't tell," marriage and the Catholic Church. When asked about the repeal of DADT, he responded that this was something that the Church would not look into. 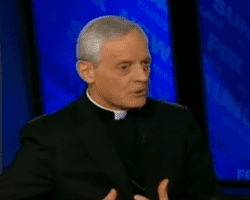 "That is a question that has to be worked out politically. And there isn't a specific Catholic Church position but whatever happens, it has to be seen in terms of the church's teaching position. And that is, human sexuality is something that is supposed to be exercised responsibly and within the context of marriage."

"What the church is concerned about and what it brings to this debate, this discussion, are two realities. One, the understanding the long, long teaching of the church that every human being is worthy of respect. Then you also have to take the rest of the Gospel message, the rest of Jesus's message that human sexuality has a purpose. And this is not for simply personal satisfaction. Human sexuality has to be seen in the context of the great gift of love, marriage, family."

"We want to be able to work with everybody and to continue to serve as we do, everybody. And so when we are asked to redefine marriage, we can't do that. … If you change that definition and then insist that we now follow a new definition, we're going to be limited.

After marriage equality came to Washington, DC earlier this year, Wuerl decided to end the archdiocese's foster care program rather than issue licenses to same-sex couples.

And what does he think about the way in which the Catholic Church dealt with its continuing sexual abuse scandal?

"I think it's one of the great accomplishments of the church. It recognized there was a serious problem. It dealt with it forthright and then moved on to see that we're in a much, much better place, a much safer place today."