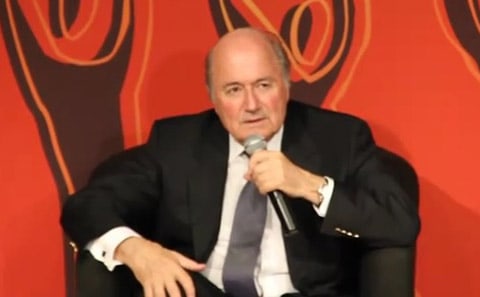 FIFA President Sepp Blatter was asked about gays who would like to go to Qatar for the World Cup in 2022 but are too afraid because homosexuality is banned in the country.

After laughing and looking around, Blatter responded, jokingly, "I would say they should refrain from any sexual activities."

He quickly clarified, but not before media took note of his rather tasteless joke.

Added Blatter: "We are definitely living in a world of freedom and I'm sure when the World Cup will be in Qatar in 2022, there will be no problems. You see in the Middle East the opening of this culture, it's another culture because it's another religion, but in football we have no boundaries. We open everything to everybody and I think there shall not be any discrimination against any human beings be it on this side or that side, be it left, right or whatever."

Watch clips of Blatter's statements, AFTER THE JUMP…

“Anything less than a full reversal of his position is unacceptable and if the FA and football associations around the world fail to acknowledge this insult, they too will be complicit. If sport cannot serve to change society, even temporarily during the duration of an event like the World Cup that invites the world to participate, then it is little more than grown men chasing a ball and we should treat it as such."