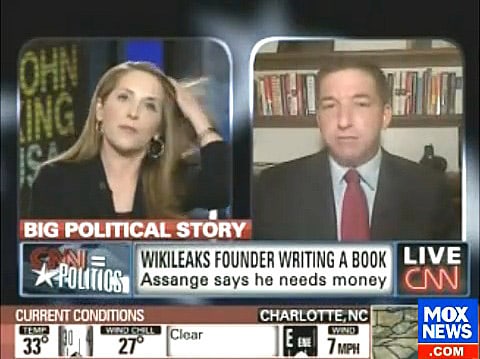 "You're absolutely wrong because the NYT uses sources all the time that take classified information that they're not authorized to disseminate and gives it to the NYT which then publishes it. Good investigative journalists, maybe CNN doesn't do this, but good investigative journalists work their sources all the time to convince them to give them classified information to inform the citizens of the United States about what the government is doing. That's what journalists do."

UPDATE: Glenn Greenwald has posted a column about this clip, noting —

From the start of the WikiLeaks controversy, the most striking aspect for me has been that the ones who are leading the crusade against the transparency brought about by WikiLeaks — the ones most enraged about the leaks and the subversion of government secrecy — have been . . . America's intrepid Watchdog journalists. What illustrates how warped our political and media culture is as potently as that? It just never seems to dawn on them — even when you explain it — that the transparency and undermining of the secrecy regime against which they are angrily railing is supposed to be . . . what they do.