Wingnut Brent Bozell, president of strictly conservative organization Media Research Center, wants you to believe that the sweet and heart-warming photo of Chris Colfer and Darren Criss (as seen on the cover of a recent issue of Entertainment Weekly) is nothing but so-called gay propaganda. He writes in his column on Newsbusters: 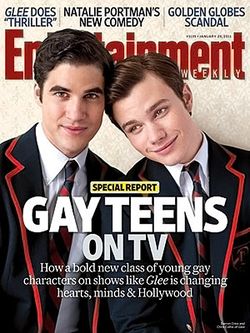 As you might suspect, Entertainment Weekly didn't plan to debate gay teen propaganda, but to encourage it, energetically. Not a single soul had anything critical to say. Not even a question. If this magazine weren't so earnestly in the tank, the story could come with a disclaimer: “This issue is an advertisement bought and paid for by the Gay and Lesbian Alliance Against Defamation.”

Writer Jennifer Armstrong summed it up like this: “The good news: Young gay characters are on a momentous roll after years of stops and starts.” EW championed under the inside headline how “networks are making up for years of on-air silence and providing inspiration for real-life youth (and parents) still searching for answers.” Armstrong says gay characters are “not just an accepted, but expected part of teen-centric television.” (Emphasis hers.) They are not celebrating diversity. They are intimidating dissidents.

In their Gay Teen Timeline, we hear the gay actors proclaiming the lack of opposition. “We never received a negative word,” says the gay actor on ABC's 1994 bomb “My So-Called Life.” The gay teen on ABC's “Ugly Betty” insisted “99 percent of the public response was positive.” Translation: get in line.

Media Matters notes: "Bozell has a history of anti-gay rhetoric. He previously argued Hollywood demonstrated 'liberal bias' by failing to portray gays as 'morally wrong.' He's also warned that the gay lifestyle and agenda 'endorses the right of gays to marry and teach children, and that's in utter opposition to mainstream America.' Bozell's Media Research Council is also boycotting the Conservative Political Action Conference (CPAC), because GOProud, a group for conservative gays and their allies, is participating."

Media Research Center states that its mission is "to bring balance to the news media." They must be taking their cues from FOX News – you know, the news network that falsely trumpets itself as "fair and balanced."