Daniel Hernandez Jr., an openly gay 20-year-old intern for Gabrielle Giffords, is being credited with saving the congresswoman's life. 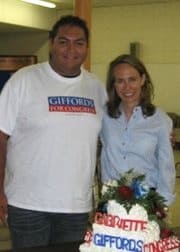 Hernandez, who confirmed that he is gay in an interview with Instant Tea on Sunday morning, is a member of the City of Tucson Commission on Gay, Lesbian, Bisexual and Transgender Issues. “She’s been a great ally to the LGBT community,” Hernandez said of Giffords during the brief interview across a bad connection.

According to the Arizona Republic, Hernandez was standing about 30 feet from Giffords during the “Congress on Your Corner” event outside a Safeway store near Tucson. When the gunshots began, Hernandez ran toward them and began checking the pulses of people who’d been hit. When Hernandez got to Giffords, he used his hand to apply pressure to the entry wound on her forehead.  He pulled her into his lap and held her upright so she wouldn’t choke on her blood.

Hernandez, who has experience in triage, spoke to Christiane Amanpour this morning about his immediate instincts right after the shooting. ABC News reports:

"When this happened, I kind of just shut off all emotion because I knew I wouldn't be any good to anyone if I had a breakdown," Hernendez remembered. "I had to lift up the congresswoman because she was severely injured, and I wanted to make sure that she was able to breathe okay because there was so much blood." Hernendez used smocks from the grocery store to bandage the wounded victims.

"The congresswoman was alert. She was able to hold my hand when I asked her if she could hear me," said Hernendez. "I wasn't able to get any words from her. She may have been trying, but because of the way that I was having to hold her it was a lot easier to just 'if you can hear me Gabby just grab my hand to let me know that you're okay.'"

Hernandez had only been an intern for Representative Giffords for only five days.