The Iowa House is holding a hearing on a proposed ban on same-sex marriage this event, and Iowa governor Terry Branstad won't say if he thinks the ban, which he believes voters should get a chance to weigh in on, goes too far in also banning civil unions and domestic partnerships. 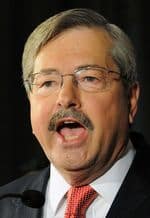 “I think the people of Iowa would appreciate and feel strongly that they should be given the opportunity to vote,” Branstad said in a news conference with Statehouse reporters in response to a question from The Iowa Independent. He said whether the proposal goes too far is a matter for the legislature to sort out and not an issue that falls under the purview of the governor.

“That’s a legislative issue,” Branstad said. “What the people of Iowa want is an opportunity to vote on marriage defined as one man and one woman.”

Monday night’s two-hour hearing on House Joint Resolution 6 begins at 6:30 in the Iowa House chambers. Dozens of Iowans are scheduled to speak for and against the proposed amendment, which would have to pass both the House and the Senate in two consecutive general assemblies before going to a public vote. The proposed resolution faces an uphill battle in the Senate, where Majority Leader Mike Gronstal, a Council Bluffs Democrat, has vowed to block it.

Says Joint Resolution 6: “Marriage between one man and one woman shall be the only legal union valid or recognized in this state."