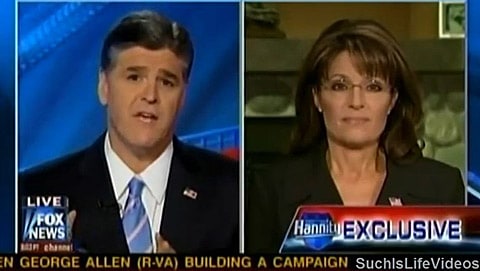 In her first interview since the Tucson shooting, Sarah Palin tells Sean Hannity that her 'target' map had nothing to do with it. She also scolds those who tied her and other Tea Party pundits and politicians to the shooting.

Palin refuses to condemn the use of targets and other symbols of violence in campaign propaganda, calling such censorship "futile".

"I think it's going to be very tough, even futile really to start censoring everyone's speech and everyone's icons that they have used traditionally for decades… We hear now of this demand for civility in discussion when it comes to political debate and certainly I agree with the idea of being civil. By definition, civil means being well mannered. We should be respectful, be civil. We should not use an event like that in Arizona to stifle debate and that time-honored and cherished  tradition that we have in America being able to respectfully petition our government and protest peacefully and respectfully in order to affect the change we see in our government."

Quoting Martin Luther King, Jr, Palin says she cannot let the lie that she and her language are an accessory to murder, to live.

Palin calls Obama's speech in Tucson a campaign stop and accuses the left of hypocrisy because of the attacks against her: "I think the hypocrisy there is so glaring and the double standards I mean, reminds me that those on the left, if it weren't for their double standards, they'd have no standards."

It's apparent she hasn't learned a thing from this whole tragedy, and Hannity does his very best to paint her as the victim.