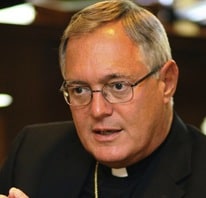 Tobin, in a statement to the media, said the drive to allow same-sex marriage in Rhode Island was “morally wrong and detrimental to the well-being of our state” and called out Chafee in particular for his support of the measure.

“It is particularly disturbing that our new governor, who has trumpeted his desire to bring our state together in unity, would adopt such a very divisive agenda item as one of his first priorities,” he said. “His proposal violates the sincere conscience of many of our citizens and inflames passions on both sides of the issue. … Our state leaders could better serve all Rhode Islanders by working on initiatives that will create jobs and improve the overall economic health of our state.”

But that wasn't the only thing Tobin criticized Chafee about this week. The governor decided to forgo a traditional public prayer service before this week's inauguration, something that Tobin has expressed his unhappiness about.

Tobin told WPRI that he is puzzled and troubled that Chafee wants to, very soon, give everyone in Rhode Island the right to marry the person they love. Watch, AFTER THE JUMP.