Legislation related to an anti-gay marriage amendment has been filed in the North Carolina senate. 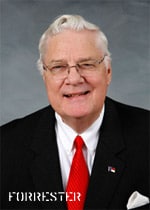 The text of the proposed amendment, which has not yet been filed in the House, would ban any recognition of any “domestic legal union” other than a marriage between an opposite-sex couple. If approved by the legislature, the amendment would appear on the November 2012 ballot. Three-fifths of both the House and Senate must approve the amendment before it can appear on the ballot; the governor has no veto authority on amendments.

Pam Spaulding, whose home state is North Carolina, has vowed to expose the hypocrites.