California's Imperial County, which was denied standing to appeal last month by the 9th Circuit Court of Appeals, has filed new papers asking the court to reconsider. 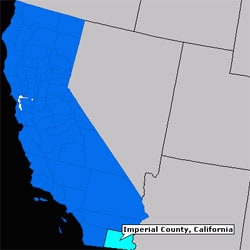 During oral argument, the panel questioned whether a deputy clerk with independent responsibilities and supervised by a separate part of the California government could, without the actual Clerk of Imperial County, even represent the county, let alone the entire state. It looks as if the Ninth Circuit was unwilling to grant a low guy on the totem poll the right to step in where the chain of authority was tenuous at best. So, this first decision is a victory of marriage equality. Imperial County had wanted to defend Prop 8 in federal court and now, it cannot.

The county has since elected a new clerk, Chuck Storey, and they are hoping the court will give them another chance since the decision last month seemed to hinge at least in part in the fact that the head County Clerk, who issues the marriage licenses, declined to be part of the case.

If successful, the move by Imperial County could salvage the appeal, allowing county officials to step in as the primary defendants if the sponsors are removed.

Imperial County officials claim they should be allowed to intervene as defendants, saying they are directly affected by the law because they would be forced to perform gay marriages.