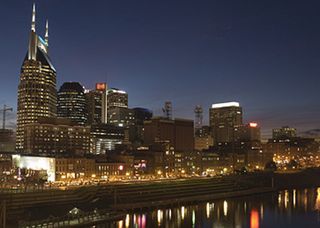 "Crazy Town" is a song about Nashville, Tennessee. It tells the story of how hard it is to make it in a town as crazy as Nashville, or, "Hollywood with a touch of twang." It may indeed be hard to make it in Nashville, but just last month, the Hollywood of the Bible Belt tried to make life a little easier for its LGBT residents. Its town council proposed legislation that would require city government contractors to abide by the city's non-discrimination policy, which includes protections for LGBT persons.

But, yesterday, Andy posted about another proposal out of Nashville — out of the state capitol building rather than city hall — wherein municipalities in the state would be prohibited from passing their own anti-discrimination laws and would instead have to rely on the state-wide statute. The bill limits the state's non-discrimination policy to "race, creed, color, religion, sex, age or national origin."

Once again, it's hard to make it in Nashville.

This story seems like it is about discrimination against gays and lesbians in government contracts and employment. After all, but for Nashville's decision to include LGBT Tennesseans in its non-discrimination policy, conservative members of the state legislature would never have proposed this legislation. It is actually much more. The proposed state law proposes to eliminate the municipality as a recourse for LGBT political activity to achieve equality. It would narrow their recourse to changing state law, something that seems far less likely given Tennessee's conservatism.

Let's set aside for the moment whether this bill is a good/bad idea. I would imagine that many readers feel this is a bad bill. I want to ask a different question: Is this constitutionally permissible?

Continue reading "Crazy Town or Crazy State" AFTER THE JUMP.

The Tennessee bill to prevent municipalities from adding sexual orientation (or any other new classification) to their anti-discrimination policies is, at its core, an attempt by the state legislature to take away from gays and lesbians the opportunity to use local politics to better their lot in life.

This should remind us of a parallel — though not identical — situation that happened in Colorado, and culminated in the landmark gay rights case, Romer v. Evans. At issue in Romer was the constitutionality of an amendment to the Colorado constitution (Amendment 2) that that would have prevented any city, town or county in the state from passing any law that would include gays and lesbians as a protected class. In other words, it prevented all levels of local and state government from passing anti-discrimination laws that included prohibitions on the basis of sexual orientation. Like the impetus for the Nashville bill, what inspired Amendment 2 was progressive local actions: Aspen, Boulder and the city and county of Denver enacted gay-inclusive anti-discrimination laws.

The Court decided that Amendment 2 was not rationally related to a legitimate government interest. It was, the Court found, based purely on animus toward gay people, which can never be a legitimate motive for any government action. But, the central problem was that it took away the political opportunities for gays and lesbians where everyone else had the right and ability to use their political muscle to get favorable legislation passed at the city, county and state level. Amendment 2 had the practical effect of allowing other interest groups to protect themselves through electing local, county and state representatives; lobbying local, county and state political bodies; and any other part of the political process. Instead, the only political option open to gays and lesbians was to get a 2/3 majority of the Colorado population to change the state constitution. Hardly an easy task, especially since the the citizen initiative process in Colorado is even harder than it is in California.

The Tennessee bill is less egregious and less restrictive than Amendment 2. The state political process is still available to gays and lesbians under the proposal, and no one says that gaining anti-discrimination protections from the state legislature has to be an easy task.

The Court seems to switch back and forth. At times, the Court emphasizes that the effect of Amendment 2 was "[s]weeping and comprehensive." And, then, moments later, the Court reminds us that Amendment 2 was really about the fact of "withdraw[ing] from homosexuals, but no others, specific legal protection from the injuries caused by discrimination, and … forbid[ing] reinstatement of these laws and policies." Amendment 2 was both "far reaching" and "takes away certain rights" and only "imposes a special disability upon … [gays and lesbians] alone."

The question remains: Is the constitutional problem in Romer that a disability was imposed on gays and lesbians alone, suggesting that any similar disability need not be as severe as Romer to run afoul of the Federal constitution's Due Process Clause? Or, is the constitutional problem that creates a due process violation the fact that Amendment 2 was so sweeping and took away all political rights from gays and lesbians, suggesting that less severe versions of Amendment 2 would not trigger a due process violation?

In the end, Romer focuses on the severity of Amendment 2: "Amendment 2 fails… First, the amendment has the peculiar property of imposing a broad and undifferentiated disability on a single named group, an exceptional and, as we shall explain, invalid form of legislation. Second, its sheer breadth is so discontinuous with the reasons offered for it that the amendment seems inexplicable by anything but animus toward the class that it affects; it lacks a rational relationship to legitimate state interests." The broad denial of rights made Amendment 2 invalid; the breadth of its reach made it irrational.

But, the decision is replete with references to suggest that even though Amendment 2 was particularly egregious and broad, legislation that denies rights based purely on animus need not be so severe and broad to clash with Romer's core holding and with due process. So, a challenge to Tennessee's proposal may be harder, but Romer provides some ammunition to the cause.

Different states have different relationships with their municipalities; different state constitutions establish different levels of "home rule" for local governments. But, suffice it to say, the issue here (and in Romer) is more about denying particular communities access to certain parts of the political process than about big (or small) state government. But, the relationship between the state and local governments comes into play: If this is the only area in which the state has imposed on the home rule of its localities, it is more likely that the state's decision to do so is based on animus toward the one group to which it is denying rights and access. And, while Romer by no means closes the book on the constitutionality of Tennessee's bill — in fact, it just barely opens it! — the proposal implicates the same values and imposes similar forms of discrimination.