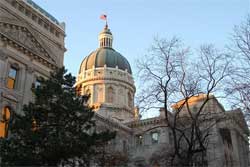 This morning I noted that a hearing was scheduled for today in the Indiana House on a measure that would put a constitutional amendment banning same-sex marriage before voters.

The bill has advanced, the Indy Star reports:

"The Republican-controlled committee approved the bill 8-4, sending it to the House floor for amendments and consideration. Several previous efforts to add a ban on gay marriage to the constitution have failed, but this year could be different since Republicans now have a majority in both houses. Even if the measure passes this year, however, it would still have to be approved by another, separately elected legislature and then in a referendum by voters, before being placed into the state’s founding document."