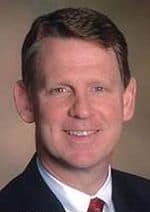 Kittleman said he plans to testify next week at a scheduled hearing on the bill.

"I was raised by a gentleman who joined with others in fighting racial discrimination in the 1950s and 1960s," Kittleman said. "Watching him fight for civil rights instilled in me the belief that everyone, regardless of race, sex, national origin or sexual orientation, is entitled to equal rights."

Kittleman said that he is a "strong follower of Jesus Christ" and belongs to a conservative church, but added: "I really believe as a legislator, I don't vote based on my faith."

Kittleman's full statement in support of the bill, AFTER THE JUMP…

I want to express my thoughts on SB 116, Religious Freedom and Civil Marriage Protection Act. As most of you know, I have long supported equal rights for same sex couples. A few years ago, I voted in favor of allowing same sex couples the right to make medical decisions for each other.

This year, I decided to work on legislation that allowed civil unions for all couples – opposite sex and same sex couples. My goal was three-fold:

1. I wanted to ensure that same sex couples had the same rights and responsibilities as married couples in Maryland;

2. I wanted to remove the government's intervention in what most Marylanders consider a religious institution (marriage); and

3. I wanted to develop a consensus on an issue that has been very divisive for many years.

In early January, I announced my proposal for civil unions for all couples. Somewhat surprisingly, I received much more criticism from people who wanted same sex marriage than those who oppose such marriages. I actually received quite a lot of messages and emails from Republicans supporting my decision.

Unfortunately, despite the support by a strong majority of Maryland voters, I did not receive any support from my Republican and Democrat senate colleagues. In fact, the Republican senate caucus yesterday voted to take a "caucus position" against same-sex marriage. My Republican colleagues have also made it very clear to me that they would not be supportive of my civil union legislation. I also did not receive any support from Republicans or Democrats in the House of Delegates.

Based upon the lack of support I have received for my civil union bill, it was evident that my legislation would not receive a favorable report from the Senate Judicial Proceedings Committee. With the deadline for submitting legislation approaching quickly and with the Committee hearing scheduled to be held on Tuesday, February 8th, I made the decision to forego my efforts to have civil unions for all couples in Maryland.

As I noted above, my primary goal has always been to ensure that same sex couples have the same rights and responsibilities as married couples currently have in Maryland. I see this issue as a civil rights issue. I was raised by a gentleman who joined with others in fighting racial discrimination in the 1950s and 1960s. Watching him fight for civil rights instilled in me the belief that everyone, regardless of race, sex, national origin or sexual orientation, is entitled to equal rights.

Consequently, with the civil union legislation no longer being a viable option, I was put in the position of deciding whether to support same-sex marriage or voting to continue the prohibition against same-sex marriage. As a strong proponent of personal and economic liberty/freedom, I simply could not, in good conscience, vote against SB 116.

I know that some may contend that since the Bible teaches that marriage is between a man and a woman, Maryland should continue to prohibit same sex marriage. First, let me state that I am a strong follower of Jesus Christ. I worked in youth ministries for many years. However, while my faith may teach that marriage is between a man and a woman, our government is not a theocracy. As the state senator from District 9, I represent everyone in my district, regardless of their faith. Therefore, while my spiritual life is extremely important to me, it cannot be the sole basis for my decisions as a state senator.

I know that some will be upset with my decision to support SB 116 and I respect the fact that people have differing opinions on this issue. I carefully considered my decision. I sought counsel from many people, including my family, clergy, advocates for both sides, fellow legislators and many others. These discussions were very helpful to me and I appreciate the time that those individuals took to talk with me. Ultimately, it was my strong feelings about civil rights that led me to decide to support SB 116.