The National Organization for Marriage has lost a legal battle in Maine, The Kennebec Journal reports: 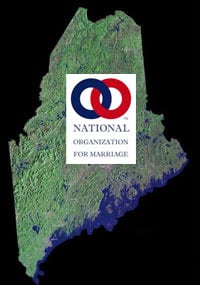 U.S. District Court Judge D. Brock Hornby rejected arguments made by the National Organization for Marriage, which contributed about $1.9 million to a Maine group that helped repeal Maine's law allowing same-sex marriage in 2009, that the reporting law was vague and overly broad.

"I conclude finally that this Maine law is constitutional," Hornby wrote in his 22-page decision handed down late Friday.

NOM had challenged Maine's campaign finance law, which requires groups that raise, or spend, more than $5,000 to influence elections to register with the state and disclose donors who make contributions of $100 or more.

"This is an important law because it allows Maine voters to know who is trying to influence them with respect to ballot questions," he said. "It is a good decision for transparency in politics."

It's not clear whether NOM will appeal.