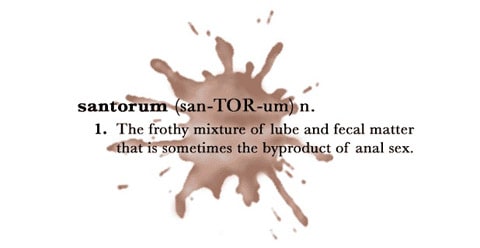 Rick Santorum spoke with Roll Call about what happens when you Google his name — the first result that comes up is this website which was created by Dan Savage in 2003 in response to Santorum's anti-gay remarks.

“It’s one guy. You know who it is. The Internet allows for this type of vulgarity to circulate. It’s unfortunate that we have someone who obviously has some issues. But he has an opportunity to speak."

But really, what's more vulgar, this, or Santorum's own remarks which inspired it:

"Then the third-most-powerful Republican in the Senate, Santorum told the Associated Press that April that gay sex could 'undermine the fabric of our society.' The interview touched on a Supreme Court case related to sexual privacy, and Santorum compared homosexual acts to allowing for 'man on child, man on dog' relationships.

Santorum says he has never contacted Google to try to fix it.