A Hickory, North Carolina man called 911 to report that he had murdered his roommate Stephen Starr:

"Anderson is accused of shooting 36-year-old Starr with a shotgun and pistol and hitting him in the torso with an ax, said Capt. Joel Fish with the Catawba County Sheriff’s Office. Anderson also carved a word into Starr’s body, as well as writing on him with a pen."

Anderson first citing the fact that he had "OD'ed" on Mucinex as the reason for the killing.

Then, this came out: 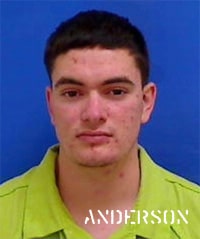 “I met him and went to his house and he took me in and I turned straight again. And he wanted to touch me and stuff and I wouldn’t let him, and he kept trying. And I waited until he went to sleep and then I shot him three times. And I mutilated him very badly and I’m sorry, I’m sorry. Oh God, please help me.”