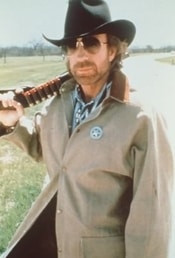 According to the actor's inane argument, published at WorldNetDaily, there's a "lopsidedness" in schools that threatens to doom us all, in part because of pro-gay attitudes among young people:

What happens when the political and public educational pendulum swings from concern for the tyranny of sectarianism in Jefferson's day to secularism in ours? What happens when U.S. public schools become progressive indoctrination camps?

Dr. Jim Nelson Black, founder and senior policy analyst of the Sentinel Research Associates in Washington, D.C., wrote an excellent book, "Freefall of the American University." In it, he documents the clear biases pervading our public academic settings. Among that lopsidedness is the intentional training of students to disdain America, freely experiment sexually, forcefully defend issues like abortion and homosexuality, as well as become cultural advocates for political correctness, relativism, globalization, green agendas and tolerance for all.

One of the primary ways these educative platforms are spread is by recruiting and retaining faculty members who reflect and teach them.

Isn't it great how conservatives are always trying to paint their ideological opponents as a bunch of cultists or as braindead idiots who can't think for themselves? They're always "recruiting" or being "recruited." What a tired, senseless narrative Norris and his ilk are trying to conjure.

Norris goes on to cite the facts that fewer teachers see a liberal bias in the news and more describe Bill Clinton as a better president than Ronald Reagan as "evidence" for his argument, which proves just how seriously this man should be taken…