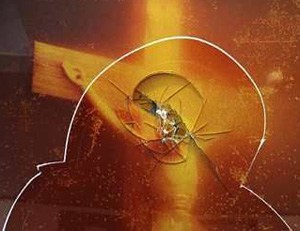 The work has previously been shown without incident in France, but for the past two weeks Catholic groups have campaigned against it, culminating in hundreds of people marching through Avignon on Saturday in protest.

Just after 11am on Sunday, four people in sunglasses entered the gallery where the exhibition was being held. One took a hammer from his sock and threatened security staff. A guard restrained one man but the remaining members of the group managed to smash an acrylic screen and slash the photograph with what police believe was a screwdriver or ice pick. They then destroyed another photograph, of nuns' hands in prayer.

Piss Christ is part of a series by Serrano showing religious objects submerged in fluid such as blood and milk. It was being shown in an exhibition to mark 10 years of the art dealer Yvon Lambert's personal collection in his 18th-century mansion.

Last week the gallery complained of "extremist harassment" by Christians who wanted the image banned. The archbishop of Vaucluse, Jean-Pierre Cattenoz, called the work "odious" and said he wanted "this trash" taken off the gallery walls. Saturday's street protest against the work gained the support of the far-right National Front, which has recently done well in local elections.

Some 24 hours after the act of vandalism was first reported, Culture Minister Frederic Mitterrand told France Info: “I’m shocked that someone can go into a museum, assault the guards and destroy an art work. This is unacceptable. If one is offended by a piece of art one should make a formal complaint at law: this is a fundamental principle of the French Republic. Any act of violence, destruction, and intolerance is unacceptable”. The minister acknowledged that the “Piss Christ” work may well offend many people but he unequivocally condemned the violence at the museum.