The Iowa GOP has "filed four articles of impeachment, one for each remaining member of the Iowa Supreme Court that participated in an April 2009 decision that struck down a legislative ban on same-sex marriage as a violation of the state’s equal protection clause," the Iowa Independent reports. 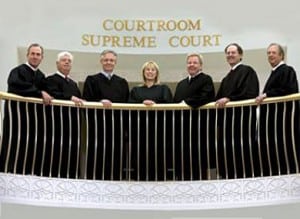 Bob Vander Plaats, the anti-gay activist who led the drive to remove the Justices and heads The Family Leader, has previously called for the resignation of the entire Supreme Court and advocated for their removal over the marriage equality ruling in Varnum v. Brien. He is also building ties with likely presidential candidates as Gingrich, Tim Pawlenty, Michele Bachmann, Rick Santorum, Ron Paul and Herman Cain have either addressed or plan to speak during The Family Leader’s “presidential lecture series.”

Iowa's Governor Terry Branstad, who has expressed his desire to have the judges removed by vote when they are up for retention, said in January that he didn't not believe impreachment was an appropriate measure to be taken.