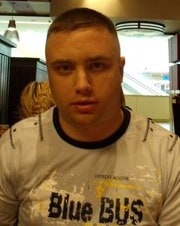 On Friday, Good As You broke the story about Louis Marinelli, the former NOM member who quit the anti-gay organization and has now come out for marriage equality. Marinelli, who was the mastermind behind NOM's "Summer of Marriage" tour, decided to speak out publicly against the hate after several conversations with pro-marriage equality supporters. He also told me that he had a close working relationship with NOM president Brian Brown, someone he still considers a friend. Some highlights from our conversation.

On the recent positive reaction among marriage equality supporters:

"Mostly negative things have been said about me in the past but i'm glad to see everyone put that behind them and its very inspiring to see what they have to say about someone who has been quite rough with them, to say the least."

On deciding to declare his support for marriage equality in the way he did:

When I came to the conclusion that I was going to do this, probably in January, I wanted to do it in a way that would be helpful. That's why I decided to do the story. I thought that it would go out and people would see it and I could go and try and convince other conservative-minded people to follow.

How he came up with the idea for the "Summer of Marriage" bus tour:

"In March 2010, I had already begun planning for the "Summer of Marriage" tour because that was what I had started to work on in, I believe it was in January. I spent a couple of months working on it. By March, I had a couple of spots picked out. I had a couple of local people who were gonna help me get the licenses and the permits needed and stuff like that. I approached Brian and said "hey I got this thing going a little bit" and I wanted to see if he'd be interested in participating or sponsoring or both or help it grow and be more successful. He indicated that he liked the idea and by April we were already having conference calls planning it."

The rest, AFTER THE JUMP.

On Brian Brown's reaction to the news that he now supports marriage equality:

"He was surprised as I could imagine. There wasn't any kind of a forewarning to it. It was a complete surprise to him….I respect Bryan and consider him one of my friends and so it was a difficult thing for me to do and that's why it took so long for really to happen. Its difficult to turn your back on someone that you consider to be your friend. But I knew I had to do it. I had to weigh that versus the greater good. I came to a decision that the greater good is to ensure that our fellow American citizens have equal rights." 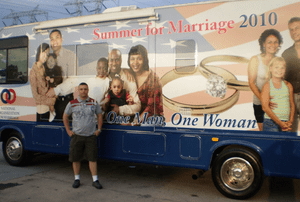 "(She is) a highly intelligent woman who loved to debate, loved to be the center of attention in a debate and I would say would be very difficult to debate with her because she had a lot of book smart factual statistics in her picket which she could throw out at you and make you look like you're unprepared to debate her."

"She just seemed a little bit like she was in her own world. She would sit there at her netbook and type away and people would talk to her and she would nod her head and say 'yeah, yeah' or something like that. You know, when you get that sense that she's not really paying attention."

On the fact that Maggie Gallagher could never get his name right:

On Brian Brown, whom Marinelli still considers a friend:

"Brian is a man of devout faith who believes strongly in his religious beliefs and is gonna do what he needs to do to protect his freedom of religion."

On what he thinks will now happen to his friendship with Brian:

"I don't expect that we're gonna be in much contact coming in the future. And that's disappointing but I had to do what I had to do and I had to weigh the two and I came to the conclusion that protecting and fighting for equal rights for all Americans is better than preserving any one particular friendship. In fact, if it is true friendship then the friendship will continue regardless in any difference in opinion."

On his plans now that he supports marriage equality:

"I don't really have the platform in which to do anything but if I was given the platform or opportunity to participate in any kind of activity or campaign or anything, any organization that I can help, I'm willing to help to the extent possible… I want to make myself available to whatever organization needs my help in any way that they need it to do what I can to a) reverse some of the things I've done in the past and to b) help progrss to help ensure that there is the freedom to marry in the future."