A new poll from Gallup released today shows a majority in America support marriage equality, but it's a sharp shift since the last time they took the poll, the L.A. Times reports: 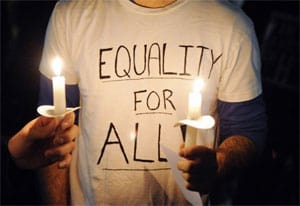 A new Gallup Poll released this morning finds that this month 53% of Americans say same-sex marriage should be recognized in law as equally valid with traditional male-female marriages.

The spurt in support of 9% in the past 12 months was the largest registered since Gallup first tracked the topic in 1996. Back then, only 27% supported same-sex marriage and two-thirds opposed.

Support for same-sex marriages had hovered in the low 40's since about 2004, until the latest figures, showing 59% of independents and 69% of Democrats now support the idea, while 28% of Republicans do. The GOP figure was unchanged from 2010.

The new statistics also show a predictable generational cleavage, with support for gay marriage highest among the youngest (70% among those 18 to 34), declining to 53% among those 35 to 54 years old and weakest among those over 55 (39%) — although even that segment's support increased six points in the past 12 months.

Two more polls from other agencies have also reflected this change.

In March, a Washington Post-ABC News poll: "Five years ago, at 36 percent, support for gay marriage barely topped a third of all Americans. Now, 53 percent say gay marriage should be legal, marking the first time in Post-ABC polling that a majority has said so."

Previous Post: « Watch: All the Single Undies
Next Post: Watch: Rachel Maddow on Why Dick Cheney’s Book Cover is Creepy »