There is little to add, beyond what has been reported here and throughout the blogosphere. But, there is one thing that many of us have missed. 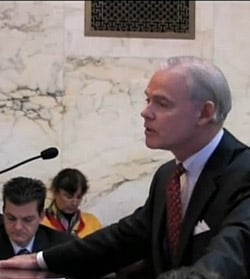 Much to the amazement of the gay media, Charles Cooper, the lead attorney for the Prop 8 proponents, vowed to appeal Judge Ware's decision throwing out Mr. Cooper's frivolous, dangerous and hateful motion to dismiss. Mr. Cooper stated that his "legal team will appeal this decision and continue [its] tireless efforts to defend the will of the people of California to preserve marriage as the union of a man and a woman."

Appeal such a wholehearted beat down? Does he think he will get any more sympathy from a panel of Ninth Circuit judges who have known Judge Walker for years and have, in any event, already invested their court's own time and effort into this case?

It is hard to imagine Mr. Cooper really thinks he can win. If he does think so, he is simply a bad attorney. But, by filing an appeal, he may be a master strategist. The Prop 8 proponents know that they are fighting a losing battle — their attorneys were inept at trial, failing to offer evidence; they have no real arguments on their side; all three judges on the Ninth Circuit panel to hear the standing and merits were skeptical. The only hope is to delay, to delay same-sex marriage for so long, to frustrate the gay community so much, that we make the first mistake. Mr. Cooper is not a bad lawyer. He knows that the stay of Judge Walker's ruling prevents us from getting married. He also knows that Equality California and activists across the state are getting impatient, holding town hall meetings to discuss whether to put same-sex marriage on the ballot in 2012. Such a plan would be dangerous, ill-advised and counter-productive; it would also be Mr. Cooper's dream come true. Anti-gay marriage forces could mobilize their lies, fear mongering and hate, rile up a posse of voters to enshrine discrimination into the California Constitution and destroy the Perry case once and for all, letting Mr. Cooper off the hook. So, the appeal of Judge Ware's unassailable decision is meant to delay, delay, delay as long as possible, hoping we blink first. Not bloody likely!