Right Wing Watch points us to these excerpts from an interview in the Tulsa Beacon with Oklahoma lawmaker Sally Kern, famous for her remark that homosexuals are a greater threat to our nation than terrorists. The interview is in advance of her forthcoming book, The Stoning of Sally Kern. 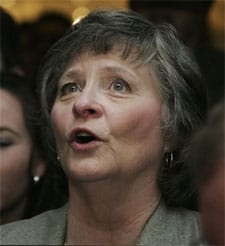 Here's how Sally sees it.

On the gay "lifestyle":

“I took a lot of heat when this all started because I said this is a lifestyle they choose,” said Kern.

"And when I say choose, they don’t choose it in the sense of like going through a cafeteria line and looking at all the different types of lifestyles and saying, I’ll take that one because it looks exciting.

“No. Everybody knows it is not exciting. It has many harmful effects. They choose it in the sense that they succumb to the temptation to give into it. They are not born that way. God would not call something an abomination and make someone where they had no choice. They have the opportunity, they have the power to say no to that lifestyle.”

“The average American doesn’t understand the threat that homosexuality and the total acceptance of it into our society is to our nation,” Kern said. “We need to wake up to this threat.

“I am always being accused of hating homosexuals. I don’t hate anyone. This isn’t a matter of hating someone or trying to deny them their equal rights. All American citizens have equal rights under our Constitution. This is trying to get acceptance for a behavior that is specifically mentioned in God’s Word that is wrong.”

If the homosexuals get special status for same-sex marriage, what would stop them from seeking approval for group marriage or marriage to animals or children, Kern said.