Voters in Liechtenstein, the tiny country wedged between Switzerland and Austria, on Sunday approved a partnership law for gay and lesbian couples, the AP reports: 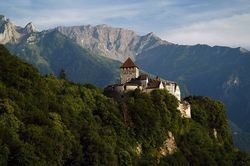 The government says 68.8 percent of voters approved the law in a binding referendum Sunday. About 31.2 percent voted against it.

Gay and lesbian couples will now be put on a par with heterosexual couples when it comes to inheritance, social security, immigration and taxation. They will still be barred from adopting children or accessing reproductive medical services.