Following rumblings earlier this month that they were coming, Freedom to Marry reports that the first hearing to discuss repeal of the Defense of Marriage Act (DOMA) will be held in the Senate next week: 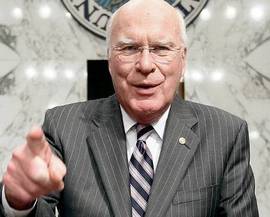 Today, Senator Patrick Leahy, chairman of the Senate Judiciary Committee, announced a hearing on the Respect for Marriage Act, the bill that would overturn DOMA, scheduled for Wednesday July 20th. The hearing will be the first time Congress has heard testimony on legislation that would end federal marriage discrimination against gay and lesbian couples.
“With thousands of loving and committed couples in New York set to marry this month, now is the perfect time for the Senate to begin the process of repealing the discriminatory so-called Defense of Marriage Act,” said Freedom to Marry National Campaign Director Marc Solomon.  “Until DOMA’s enactment, the federal government had always honored marriages celebrated in the states. It’s time for Congress to end this gay exception and allow legally married same-sex couples access to the tools and security available to all other couples to build a life together and protect their families.”