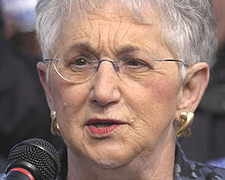 Representative Virginia Foxx and her Republican peers got their anti-gay wish.

The North Carolina lawmaker introduced an amendment for the 2012 Department of Defense budget that reinforces the Defense of Marriage Act, and the House of Representatives yesterday approved that measure by a vote of 248-175. Because, you know, they didn't think that DOMA's mere existence isn't enough.

"This amendment is completely unnecessary and only serves to cloud the debate over ‘Don’t Ask, Don’t Tell’ repeal by pointlessly injecting the issue of marriage equality into the conversation," he said. "Since Pentagon officials have made it clear that they are bound by DOMA like every other federal agency, it’s puzzling why Rep. Foxx would question whether our military leaders understand this point."

Solmonese continued, "House Republican leaders seem to have no end to their desire to play politics with lesbian, gay, bisexual and transgender people instead of tackling real problems.  It will be up to the Senate to reject the House’s return to using LGBT Americans as a wedge issue.”

So, what do you think, reader? Do you have faith that the Senate will debate this amendment into oblivion, or will they fall in line with Foxx and her ilk?