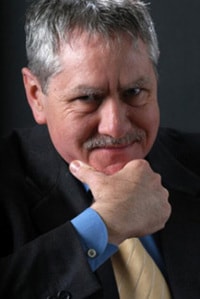 Fox News' Fox & Friends has been all over California's FAIR Education Act, a recently passed bill that requires teachers to include same-sex accomplishments in their history courses.

First, back in April, the news show hosted Tucker Carlson, who called the bill "frivolous" and said, "It's propaganda, it's lying."

Now that the law has passed both California's Assembly and its Senate, Fox & Friends decided to invite University of Dayton history professor Larry Schweikart to discuss the bill.

And, according to Schweikart (pictured), the bill is nothing but "political correctness" that opens the door to more "irrelevant" history.

This is a continuation of the kind of political correctness that we talked about a couple of years ago on Fox & Friends when we did our "trouble with textbooks" segment, and basically what it's going to require is that you have certain number of lines, literally, certain number of words, dedicated to gays and lesbians at all points in history, as you now do in the textbooks with blacks, with Hispanics. You know, I'm sure the national association of albinos and the association for polygamists is waiting out there to get in line to have their say and to start making sure that they get acknowledged, too.