Indiana State Representative Phillip Hinkle, who voted to pass a constitutional amendment defining marriage as a man and a woman, has apparently been caught trying to bribe an 18-year-old male teen he met on Craigslist after what sounds like a sexual rendezvous/assault in a hotel room. Hinkle claims it’s a “shakedown”. 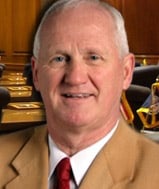 The emails, sent from Hinkle’s publicly listed personal address, ask the young man for “a couple hours of your time tonight” and offer him cash up front, with a tip of up to $50 or $60 “for a really good time.”

The email exchange is in response to the Craigslist posting in which the young man — who lists his age as 20 in the ad but says he is 18 years old — says, “I need a sugga daddy.”

The young man told The Star that they met, but that he tried to leave after the man told him he was a state lawmaker. He said the lawmaker at first told him he could not leave, grabbed him in the rear, exposed himself to the young man and then later gave him an iPad, BlackBerry cellphone and $100 cash to keep quiet.

The BlackBerry contained all the email and phone call evidence of Hinkle’s relationship with the teen.

The young man, Kameryn Gibson, told the Indy Star that he posted an ad in the Craigslist m4m section. His sister Megan provided the paper with the emails:

Gibson said he and the man met but that they did not have sex. He and the sister, Megan Gibson, flatly denied any shakedown.

“I wasn’t shaking him down, at all,” Kameryn Gibson said.

Megan Gibson said she contacted The Star because she thought Hinkle’s actions were “creepy” and, given his stature, that his actions should be made public.

The paper has printed the full email exchange (a MUST read).

The email offers “to make it worth (your) while” in cash, and offers a personal description: “I am an in shape married professional, 5’8″, fit 170 lbs, and love getting and staying naked.”

Here’s the roll call on the marriage bill in case anyone is interested.

Previous Post: « Michele Bachmann Asked if She Would Be Submissive to Her Husband: GOP DebateVIDEO
Next Post: North Carolina Church Sign Tells ‘Perverted’ Gays to ‘Turn or Burn’: VIDEO »