Mitt Romney, who in June told voters that he was "also unemployed," plans to quadruple the size of his $12 million home in La Jolla, California, the San Diego Union Tribune reports: 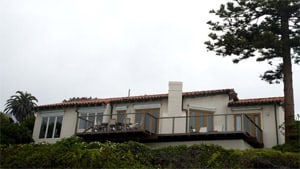 Mitt Romney has filed an application with the city to bulldoze his 3,009-square-foot, single-story home at 311 Dunemere Dr. and replace it with a two-story, 11,062-square-foot structure. No date has been set to consider the proposed coastal development and site development permits, which must be approved by the city.

The reason for the expansion, according to the official, is family: "They want to enlarge their two bedroom home because with five married sons and 16 grandchildren it is inadequate for their needs."

I wonder if it will include a cage on the roof for his dog?