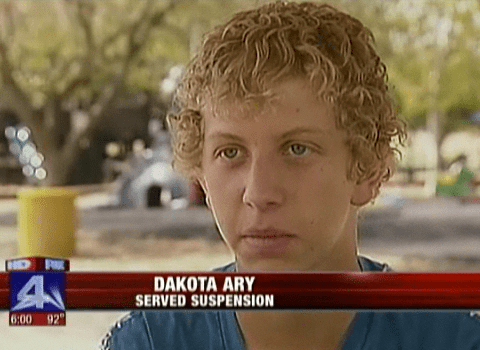 Texas teen Dakota Ary became a conservative super star when it was revealed last week that he had been suspended from school for telling his class, "I'm a Christian and, to me, being homosexual is wrong."

With the help of right wing defense team at Liberty Counsel, 14-year old Ary was able to get his three-day suspension reduce to one single day, and cleared his permanent record of the incident. He also helped ignite a national conversation about whether the student should have been reprimanded or if he was simply exercising his Freedom of Speech.

Even though he was spouting intolerance, many people, right and left alike, agreed Ary had been wronged. As new details emerge, however, it's starting to look as if Ary's remarks were less about the First Amendment and more about challenging his teacher.

Marvin Vann, head of a local anti-bullying group called LGBTQ S.A.V.E.S., recently spoke with Ary's teacher, Kristopher Franks, to get his side of the story, a side that calls Ary's telling into question. According to Franks, Ary and his pals have a history of homophobic remarks and actions. Vann's take, via the Dallas Voice:

These students subsequently took every opportunity to denounce homosexuality in class, frequently without context; that is, with the topic having otherwise been broached.

On the particular day in which this incident occurred, Mr. Franks was opening class when the topic of Christianity in Germany was broached by one student, who asked what churches were there, another whether they read the Bible in English, etc. Franks asserts that the topic of homosexuality was not broached in any way, and that Ary‘s assertions to the contrary are entirely false. At this point, Ary declared, with a class audience, “Gays can’t be Christians; homosexuality is wrong,” looking directly at Mr. Franks.

Franks says he understands and affirms students’ right to free speech, and that he is perfectly prepared to lead a respectful discussion on topics such as gay rights that allows for the assertion of opinions with which he disagrees. He has led such discussion in the past in his sociology classes. But in this case, hr feels the context makes it clear that this remark was made ad hominem, aimed specifically at him to devalue him and any information he might share on the topic of religion, on the basis of his perceived sexual orientation.

If Franks' telling is true, Ary's comments cross from free speech to verbal intimidation, which is a whole new ball game.
The Dallas Voice will have more details on this story in their Friday edition.

Until then, the rest of us are left to wonder what actually went on in that classroom…