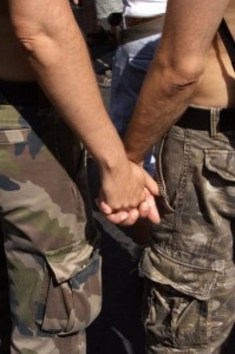 One of the most contentious issues about Don’t Ask, Don’t Tell’s repeal has revolved around marriage equality.

Though at least one branch of the armed services, the Navy, said it would allow gay marriages after the discriminatory law’s repeal, which happened on September 20th, officials later said “no go” to such events.

Now, the Pentagon announced today that military chaplains are free to preside over same-sex nuptials, both on and off government bases.

Some members of Congress have objected to military chaplains performing same-sex unions, saying it would violate the 1996 Defense of Marriage Act.

The Pentagon says a military chaplain may officiate at any private ceremony, but isn’t required if it would conflict with his or her religious or personal beliefs.

The Pentagon also says Defense Department property may be used for private functions, including religious and other ceremonies such as same-sex unions, as long as it’s not prohibited by state or local laws.

Meanwhile, in related news, outgoing Joint Chiefs Chairman Mike Mullen told NPR’s Steve Inskeep that there have been no problems since DADT’s repeal, though admits there are still many wrinkles to be ironed out, especially in terms of normalizing benefits.

“The question I get is about benefits. And there are some benefits, clearly, that are -– that accrue to the change which has already taken place, and there are other benefits which are brought up which are directly tied to DOMA, which is the Defense of Marriage Act, which is a law in the country -– and we follow the law,” he said.

“And until -– if and when that changes –- I mean, we’ll follow whatever law is out there. Right now -– so there are benefits that DOMA has tied up by virtue of what -– the details that it specifically lays out and so until that changes, there’s not going to be any change to the benefits.”

Listen to audio of Mullen and Inskeep’s chat, AFTER THE JUMP…