Mitt Romney is set to share the stage this weekend with the American Family Association's Bryan Fischer, the radio mouthpiece of a certified hate group who claims Hitler was gay and the Nazi party started in a gay bar, wants homosexuality criminalized and calls it a "deathstyle", believes being gay is a choice, and has alleged that gay soldiers will commit hate crimes against Christian soldiers. 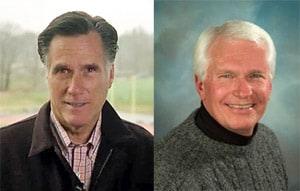 Romney speaks in the slot before Fischer and has been asked to publicly distance himself from the hate group leader at the podium:

The conference planners have obliged Mr. Romney, scheduling him to speak right before Bryan Fischer, who is chief spokesman for the family association and is known for his strident remarks on homosexuality, gay rights, Muslims and Mormons. Their talks will be followed by a panel of same-sex marriage opponents.

The liberal advocacy group People for the American Way has called on the presidential candidates, and especially Mr. Romney because he will share a stage, to publicly disassociate themselves from Mr. Fischer and what it called, in a statement on Wednesday, his “unmitigated bigotry.” The Southern Poverty Law Center has made similar appeals to the candidates.

Said Michael Keegan, president of People for the American Way: “If Mitt Romney wants to appeal to mainstream audiences, he should publicly disassociate himself from Fischer’s bigotry before handing him the podium.”