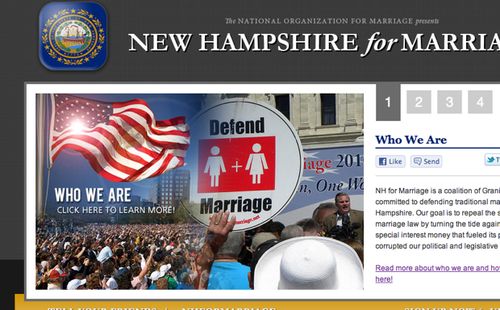 Super-sleuth Jeremy Hooper at Good As You once again exposes the fact that NOM are big fat liars.

The National Organization for Marriage is misrepresenting crowds at its rallies by using photos from rallies that people actually attend to try and make the case that the repeal of marriage equality (in this case, New Hampshire) has popular support.

Hooper points out these two photos (above, below).

He's also got another example HERE, where NOM used a Reuters photo of an Obama rally in St. Louis to try and make it look like they've got massive crowds.

NOM is lucky if they can get 100 people to their pathetic anti-equality rallies.

In fact, a recent poll showed that only 27 percent of New Hampshire adults support repeal of marriage equality while 50 percent strongly oppose it. The NH House Judiciary Committee is taking up the repeal issue today.