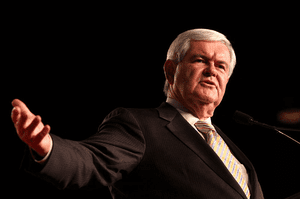 The ascendant Newt Gingrich campaign has won the endorsement of New Hampshire's Union Leader, the state's biggest, most influential, and most relentlessly conservative newspaper. (The Leader was largely responsible for sinking the primary campaign of Democratic frontrunner Ed Muskie in '72.)

This is seriously bad news for Mitt Romney. He'll probably win the state anyway — his lead in the polls is enormous — but if he doesn't, he's doomed. New Hampshire is supposed to be Romney's lodgement. Until recently, it didn't seem Romney intended to seriously compete in Iowa, the site of the first Republican caucus. He hoped to lose by some honorably small margin there, march to a decisive victory in New Hampshire, and keep winning everafter. If the Union Leader costs Romney the state, and if Cain and Gingrich can hold onto a lead in South Carolina, the third primary state, then Mitt will wander into the Florida primary with no victories and a seriously tarnished image. Newt's polled well there; so has Cain. At the moment, Romney's polling in between, but three consecutive losses could hurt his numbers.

After Iowa, New Hampshire, South Carolina, and Florida, it's on to Nevada, which Romney will almost certainly win, unless Cain's still popular for some reason. But by then, it might not matter.

New Hampshirites head to the polls on January 10th.